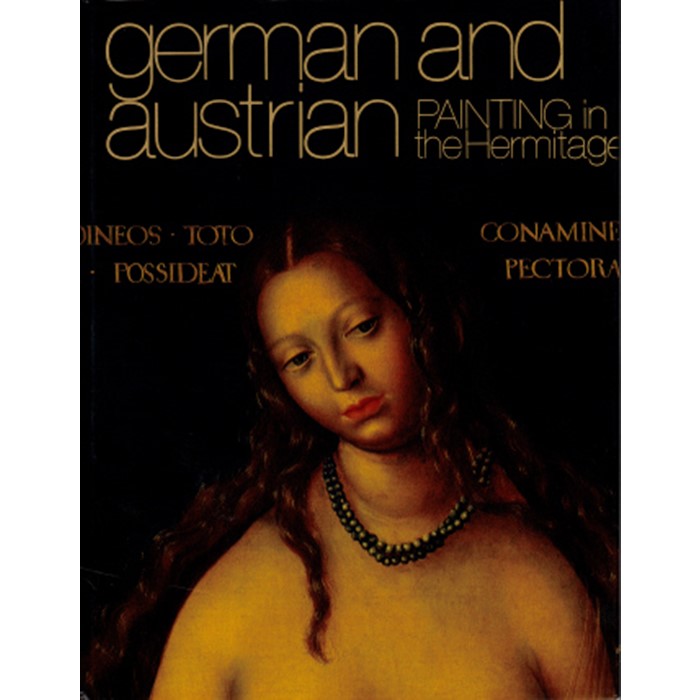 „This amply illustrated book reproduces the best works of German and Austrian painters (15th to 20th century) from the collection of the hermitage Museum in Leningrad.

The collection, which amounts to more than 700 paintings and includes many works by outstanding masters, is the largest outside Germany an Austria. It gives comprehensive account of the development of German and Austrian painting over the period of five centuries.

The art of the German Renaissance is represented in the Hermitage by the excellent canvases of Lucas Cranach the Elder, Ambrosius Holbein, Bathel Bruyn, Georg Penez and other eminent painters. Of particular note among 17th-century paintings are works by Johann Heinrich Schönfeld, Christoph Paudiss and Jurgen Ovens. The collection is especially rich in paintings dating from the 18th and 19th centuries. These include portraits by Antoine Pesne, works  by the Classicist painters Anton Raffael Mengs and Angelica Kauffmann, and an important group of works by German landscape painters. Remarkable among the latter are Romantic landscapes by Caspar David Friedrich.

The art of portraiture is illustrated by the first-rate canvases of Johann Friedrich August Tischbein and by the works of the Austrian masters – Johann Baptist Lampi, Josef Grassi, Ferdinand Georg Waldmüller, Hans Makart and others.

All the leading German schools of painting are represented in the collection by major names: the Düsseldorf school, by Carl Friedrich Lessing, Ludwig Knaus and the Achenbach brothers; the Berlin school, by Franz Krüger and Eduard Magnus; and the Munich school, by Heinrich Maria von Hess and Peter von Hess.

The material is arranges chronlogically. The introductory articles to the first section /15th to 18th century) and the second section (19th and 20th centuries) provide a general description of the collection and tell the history of its formation.“